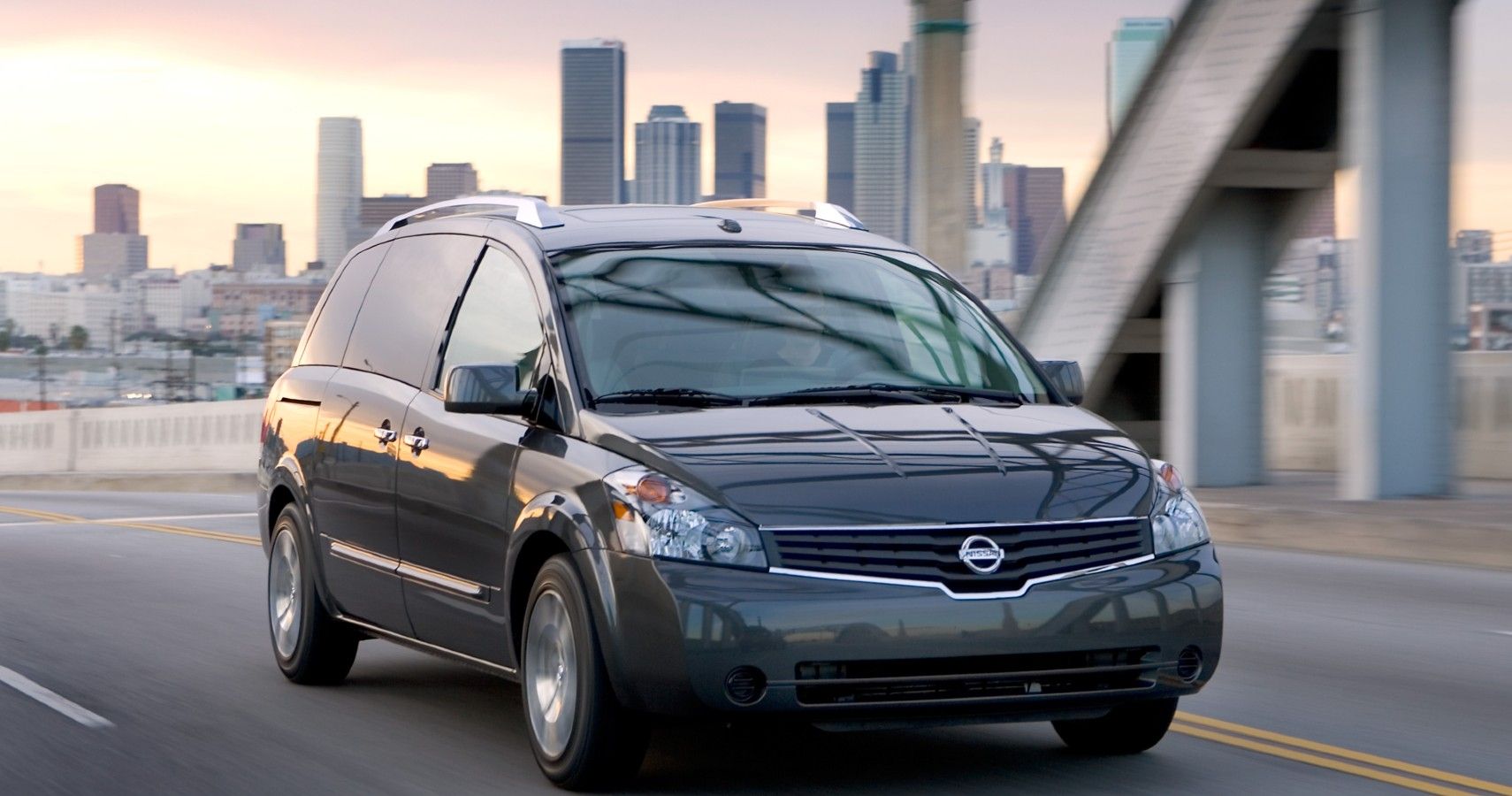 Minivans are not thrilling. You only tend to buy one out of necessity – your third kid is on the way, so your family will soon outgrow your humble hatchback, or maybe you just want a cavernous space to carry everything your family likes to cart around. They’re endlessly versatile vehicles, but not the sort of thing you get excited about buying and owning.

But that doesn’t always need to be the case. There are some minivans from the golden era of the segment that can still provide you with a unique and maybe even memorable ownership experience. This “fun” can come from anywhere – a neat interior design that makes even mundane tasks a little more interesting, a V6 engine that makes good power and a great noise, a trunk so large it produces its own gravitational pull, or a design that looks good against the backdrop of overstyled CUVs in 2020.

There are a few vans that could fit this bill, but none ticks all the boxes quite as effectively as the third-generation Nissan Quest (2004-2009). The first and second-generations were rebadged Mercury Villagers, which were moderately successful but not very well made, and the 2011-2017 fourth-gen Quest is one of the ugliest vehicles of all time.

But that third-generation van, particularly the pre-facelift model, is a harmonious sweet spot of early-2000s minivan styling, interior packaging, and (relative) performance that was woefully overlooked in its heyday but has aged rather well – which is no easy feat for a 2000s Nissan product – and it stands out as a genuinely interesting used vehicle proposition today.

If you’re on the market for a used minivan, the 2004-2009 Nissan Quest should be at the top of your shopping list, and here’s why.

Part of the Quest’s charm is the platform it shares with Nissan’s “Four-Door Sports Car,” the Maxima. Thus it inherits some of the Maxima’s handling characteristics, which are respectable, and more importantly, it shares its engine. The 2004-2009 Nissan Quest has a “VQ35” 3.5l V6, which you’ll also find in the Altima, a handful of Infinitis, and the 350Z sports car.

In the Quest, it was tuned to make 240 horsepower, but even so, it was enough to give this minivan a respectable towing capacity of around 3,500 pounds, and more importantly, it still sounds like a VQ35 – which is to say quite lovely if you don’t hack off the exhaust and weld in your own straight pipe. You can get aftermarket exhausts for the Quest if you’re so inclined, but even the stock system makes a good enough noise.

Otherwise, the VQ does a fine job motivating this new millennia minivan with ease. It’s fast enough to get out of its own way without upsetting any of its 7 passengers, and it’s decently fuel-efficient when driven carefully. The VQ has also proven itself to be quite reliable in this application. There is a known issue with timing chain guides and tensioners that can fail, but you’ll know immediately if you have an affected engine by a telltale rattling sound on startup. That problem can be easily addressed by most mechanics. Your biggest enemy will be the same as any other older vehicle: rust. No car is immune, so be thorough when you look one of these over before buying.

Mercifully, the Quest missed out on the XTRONIC CVT disaster, which removes an almost guaranteed failure point that plagued most other Nissan models. The Quest used a 4-speed automatic transmission for the first few years, which was upgraded to a 5-speed unit in 2007 when Nissan gave the van a moderate facelift.

Its Interior Is Genius

What you see pictured above are the optional glass moonroofs, one for nearly every passenger. They look like the observation windows in a safari car, and they open up the cabin in a way that only flooding natural light can do. In between these windows is a roof console that runs down the spine of the van, with a total of four storage cubbies, four adjustable map lights, and four vents to keep everyone’s heads cool – an essential feature in a vehicle for large families.

Elsewhere the cabin is full of clever storage solutions. The rear bench seat folds into the trunk floor, a feature that still wasn’t yet widespread in the early-2000s minivan market. The middle row seats could also fold down or be removed entirely. There are at least 1.5 cupholders per passenger, and the seats are arranged in a theatre style, meaning each row sits a little higher than the one in front of it so rear-seat passengers have a better view out the front window (which, in my experience, is an excellent cure for carsickness).

Mom and Dad also get to enjoy the Quest’s clever interior with its sci-fi dashboard and gauge cluster. Tesla’s Model 3 reignited the debate about center-mounted gauge cluster displays, but back in the 2000s, it was a fairly common trend. Among others, the Toyota Echo, the Chrysler PT Cruiser, the R53 Mini Cooper, Nissan’s own X-Trail, and a few Saturns used this design and there’s still no definitive answer on it being better or worse than gauges behind the wheel. It’s something you’d want to experience with your own eyes to know if it will be a problem for you.

But the Quest’s dash is cool for more than just the gauges. The center console “barrel” comes up from the floor at a sharp angle, meaning the shifter, HVAC, and stereo controls are presented to you on a slanted surface. It looks like something from a Star Trek set, but it also makes it very ergonomically friendly. You don’t have to strain your wrist to operate any of the controls, so on top of looking cool, it’ll help you stave off carpal tunnel syndrome a little longer.

The Quest came with all kinds of toys, especially if you checked the “Technology” package. This would give you power sliding doors, a power tailgate, a DVD entertainment system for the rear passengers, GPS navigation, an upgraded stereo, and tons more. You could get a backup camera, but parking sensors were standard. So was traction and stability control.

Third-gen Quests are cheap. Really, really cheap. You can find clean ones with reasonable mileage and loaded with features for well under $6,000, and rougher ones can be had as low as two grand. That’s a lot of car for really not much money, and if you need a big, practical family hauler it’s a hard argument to ignore.

Perhaps part of the reason these vans fell so quickly out of favor is the styling. It certainly isn’t beautiful, and its vaguely French design (owing to Renault’s tumultuous ownership of Nissan) makes it less familiar to American eyes. It looks like a pregnant Renault Vel Satis, but against the backdrop not only of modern cars but also this van’s contemporaries, it looks unique and quirky. It’s certainly easier on the eyes than the fourth-generation Quest that came after it, and this straight-line era of Nissan design keeps looking better compared against the bizarre directions the brand’s designers have taken lately.

Ownership costs shouldn’t be massive either. As mentioned above, the VQ35 engine doesn’t have many common failure points and you won’t have to deal with the ticking XTRONIC CVT time bomb. Buying one with minimal electronic features would be the safest bet for longevity, but power doors shouldn’t be a reason not to buy an otherwise clean van. The big things to look for are body rust, oil leaks, and the aforementioned rattling noise that indicates a broken timing chain guide.

The Quest is not a driving enthusiasts’ car, but other than a much smaller Mazda5, it’s the closest you’ll get to one in the 2000s minivan market. It has a great engine, a brilliant interior, and the coolest dashboard in any minivan. All of that adds up to a unique experience for driver and passengers alike, which is something that you can’t really engineer into a car. It takes a combination of things, some intentional and some not, to turn a car into an experiential one, which this one manages to do, and it so generously gives that experience to 7 people at a time.

If you’re looking for cheap family transport or a big vehicle for carrying your stuff, take a look around your area for a used Nissan Quest. You don’t usually buy a minivan with your heart, but a Quest might still have some glimmers of joy for the person who must balance his love of cars with his love for his growing family.

NEXT: 15 Craziest Modified Minivans That Are Anything But Boring

Sam Berube’s love of cars began from a young age, flipping through copies of Guide de l’Auto, digging through stacks of car magazines and watching re-runs of Top Gear. His tastes in cars range from the Pagani Huayra to the Pontiac Bonneville – anything with a motor, wheels and some form of character. He has yet to own an Alfa Romeo.